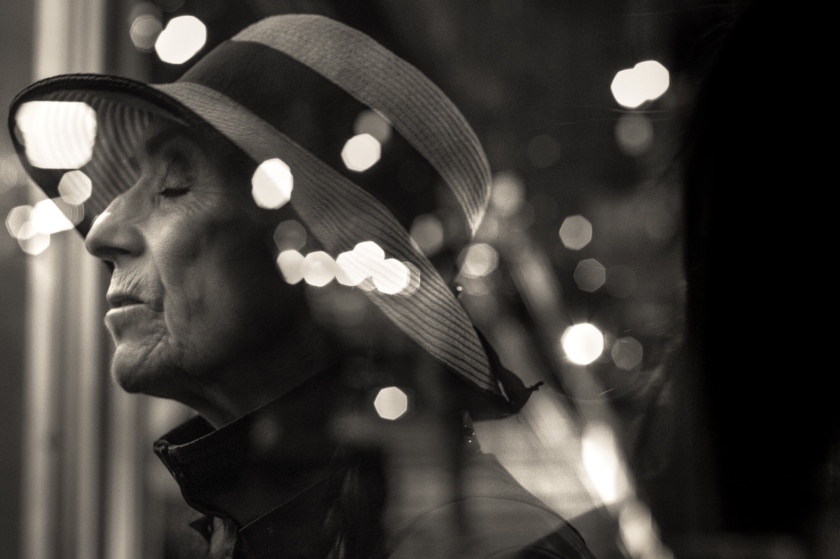 This picture leaves out a great deal. It’s missing some pretty important physical characteristics to be perfectly honest. In fact, it’s a complete departure for me as a street photographer. I say that because I am always after a character….I chase characters sometimes. I will often focus on hands, or demeanor as it affects posture, or an emotional state as it reflects in idiosyncratic movements that can make a general statement about time, place, context. I’m usually trying to weave the person into a background and create a realistic and concretely presented narrative in a picture. I love realism, and I always hope that the pictures I create accurately reflect what’s going on in front of me. And I say all this afterward….because I don’t typically think it through while I’m trying to do these things. I will try very hard in the moments but it’s only later that I understand myself what I was doing. It’s all intuition in the moment. Composition is something that I work at, but sometimes miss in the process, only later seeing my mishaps as I review my images.

I’m becoming more and more aware of transience, and of transitions. Transience in the ephemeral sense of the word….and of the world. Sometimes I look back on my own pictures of a place, or remember a picture as I pass by the very spot where it was taken here in New York City and I feel odd. It’s like the event that transpired over a few seconds never existed at all. And I realize that there is so much to look at, to perceive, that my “decisive moment” (quoting Cartier-Bresson of course!) could be entirely missed by someone standing right next to me. Decisions and moments as perceived by individuals vary…. 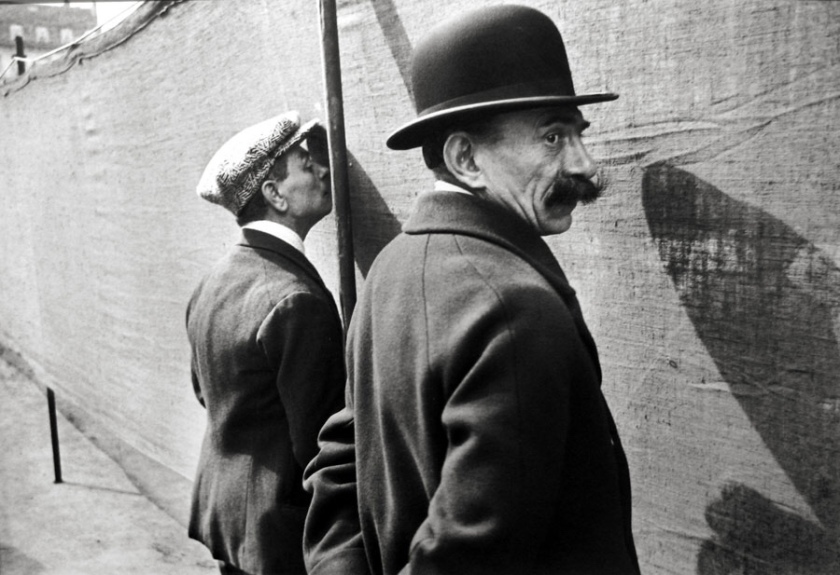 I know that I am in constant sensory overload as I live my life currently in New York City. Sometimes I worry that there is too much going on in life here to be able to distill these constantly changing transitions into a photograph. I don’t think that one dimensional images always make me feel that I’m doing my best to recreate in a single image what I’m thinking and seeing. There is perspective, subjective and objective….but where is the picture that just is. Devoid of my personal experiences and perspective….where is that picture and how do I create it? I really want to present all of these transiently displayed nanoseconds that are gone in a flash and seem to happen all at once in the same spot, separated by seconds. I think that, for me, the way I shoot Street Photography changes moment to moment. I think that it is time to transition into a more dimensional approach to representation of our world….a newer way of trying to create a picture of time and place.

14th Street at 5th Avenue….all at once, in almost the same place, I see these simple occurrences. Minute and commonplace, they replace the weight of the “decisive moment” with the rapidity and ephemeral nature of iCloud lives lived, like spirits appearing and disappearing, rapidly and without much meaning.

I am tired of “life on the street” pictures….but these portraits were of people I see often at or near the intersection of 14th and 1st Avenue in the East Village. It’s a miracle to me that they are still standing. Winter is coming, and I wonder who will be left at this intersection when Spring arrives.

A moment after the struggle in her face reflected in the previous portrait, a friend stops on his way elsewhere….and disappears just as fast.

I’m not interested in taking the same picture again and again. I’m interested in reflecting my current thoughts about time and all of these events and positions and faces and minute bits on the sidewalks, bursts of color and movements ricocheting around me at all times.

In the picture at the top of this post, I have a woman lost in a dream. I was lucky to catch her at night….because, had it been daytime, I would have focused instead on her insanely long braids, dark brown and hanging down the front of her body to her waistline. I decided to leave those braids and her otherwise obvious appearance as a tourist out of the image in favor of the transience of her expression….I would have normally become steeped in the physical nature of her character, and I would have missed completely the emotion and mystery of her thoughts and mood. The picture caught her few seconds of thought, and then she was again in motion, lost in the contemplation of a tourist map as she and her husband tried valiantly to navigate through Manhattan back to the sanctuary of their hotel room.