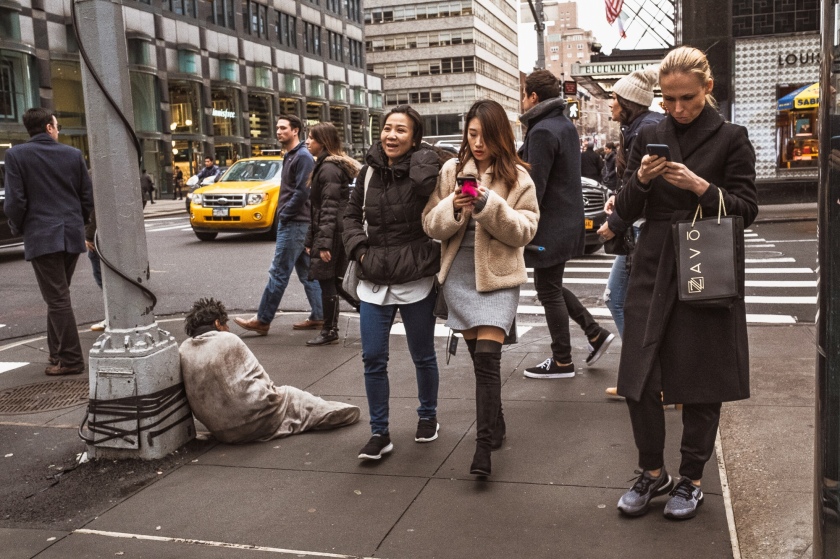 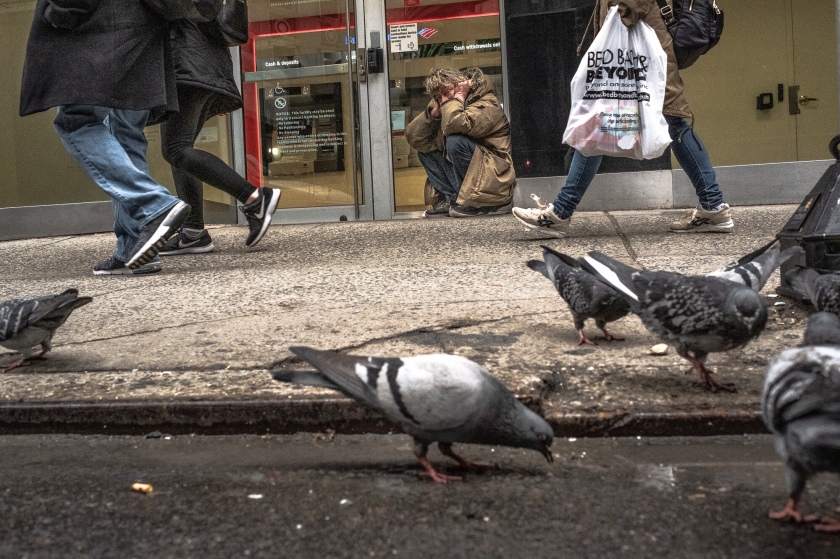 Someone suggested that I be featured in a popular photo blog last Spring. A letter of introduction was written, and a glowing recommendation was given. The response was strange….when confronted by the suggestion, all this young male blogger could say was that there were images of the homeless in my work and that it made him uncomfortable to have this type of imagery in his blog. Now I take many many pictures and they are most definitely not all of destitution and disaster. I found his reaction to be strangely disturbing….a few recent homeless pictures in New York City was enough to turn this situation into a corner? Most of my New York work is nothing at all like my project done in Los Angeles on Skid Row….a project that’s really not a project…. more like a calling, a lifetime that I hope to spend photographing the people of those streets. How can anyone considering modern photography leave out realism? In any case, so much of my recent work could certainly be categorized as “respectably” leaving out any references to homelessness so why categorize an entire body of work based on a facet or two? Very unsettling….that images of this reality are so distasteful to many young photo editors and bloggers that they just turn away….instead focusing their attention on pictures that capture the light side, or on images of poverty that are sanitized, color corrected and gentrified, and that fail to highlight the very real dirt and grit and ignorance that define many lives. It seemed that documentary images of poverty and extreme difficulties were acceptable if they came from Mexico or Africa or Syria…..but similarly disturbing images coming from the “First World” were somehow labeled incorrectly. The distaste runs so hard and deep and impermeable that disturbing imagery is easily and routinely dismissed by simply labeling it exploitation. At its heart, this dismissal is, I believe, a direct result of a culture immersed in its smartphone and less connected to what’s going on in the immediate surroundings. It enables a lack of sensitivity that can define and decide which images attain credibility and which ones are ignored. So…..I sent him an email, detailing and introducing myself and my work. And….he just completely ignored me.

And what happened after? I began to question myself. I thought maybe I should just stop shooting these pictures, or, at the very least, continue shooting them but don’t post them publicly. I was disgusted by this characterization of my efforts, and couldn’t believe that it mattered. But I realize that it does matter in today’s world.

So I walked past, along with everyone else. I submerged my impulse to walk over, to do a portrait or a street picture….held myself at bay, focused on other things and people…..and I stayed off the ground. Occasionally I succumbed but mostly I ignored. I needed to focus elsewhere. Which I do anyway, depending on my mood and the immediate vibe and circumstances I find myself in. But this was different. I stopped believing in the people in the business of photography. I began to realize that popularity was important in a way that was intensely disappointing. That it affected art, and exposure, and perceived achievement.

Then…..somehow I stopped caring. I realized that my perception of art and life and what’s important hadn’t changed, and that no matter what I wasn’t about to stop shooting exactly what I see. I went to J’Ouvert in Crown Heights and shot what I saw. I went to Philadelphia and shot what I saw. And I really felt that no matter what, I couldn’t walk past some electric scene or person without picking up my camera and it didn’t matter if it offended or made someone turn away. What mattered was that it was REAL. Real to me, in front of my face, obvious and beautifully in the moment. Why I picked up a camera in the first place.