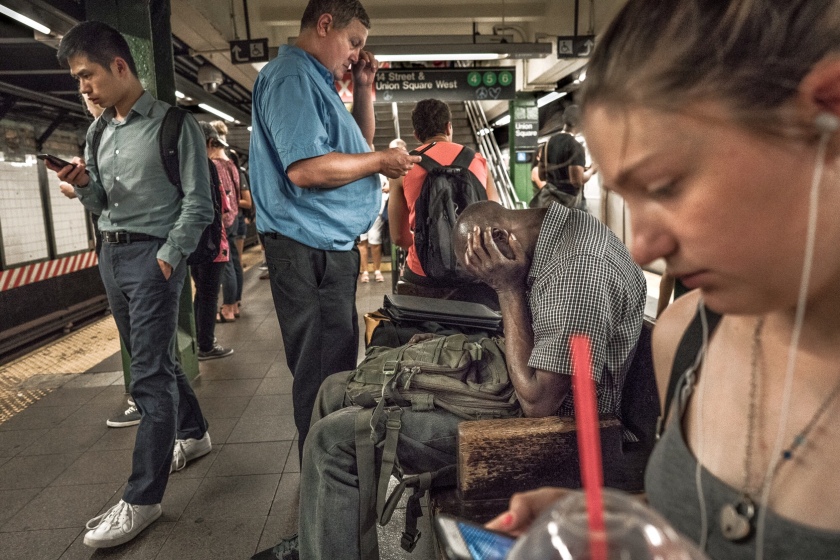 Modern street photography for me is always going to be pretty basic. What are people doing? What are the narrative elements, modern narrative pieces that sharply describe life Now? What are the images that, in my estimation, best define us Now? If I Google “New York City 1930’s”, I get black and white pictures, images that show me some of what it looked like back then. Here’s one of a streetcar from the Todd Webb Archive: 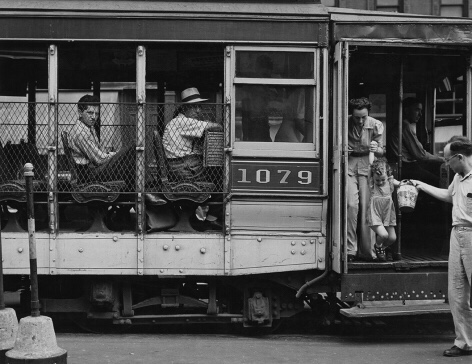 Here’s an image by Stanley Kubrick:

Riding the Subway with Stanley Kubrick 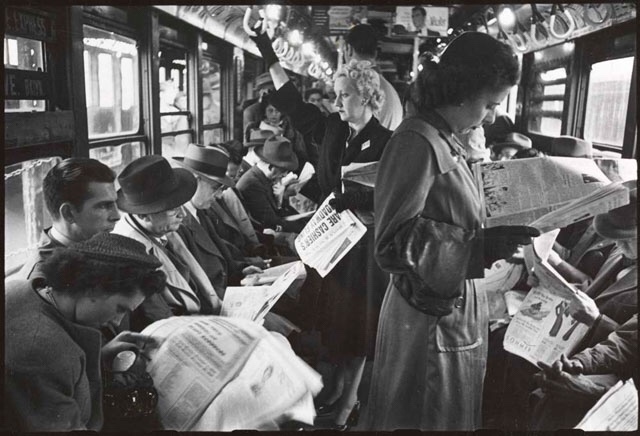 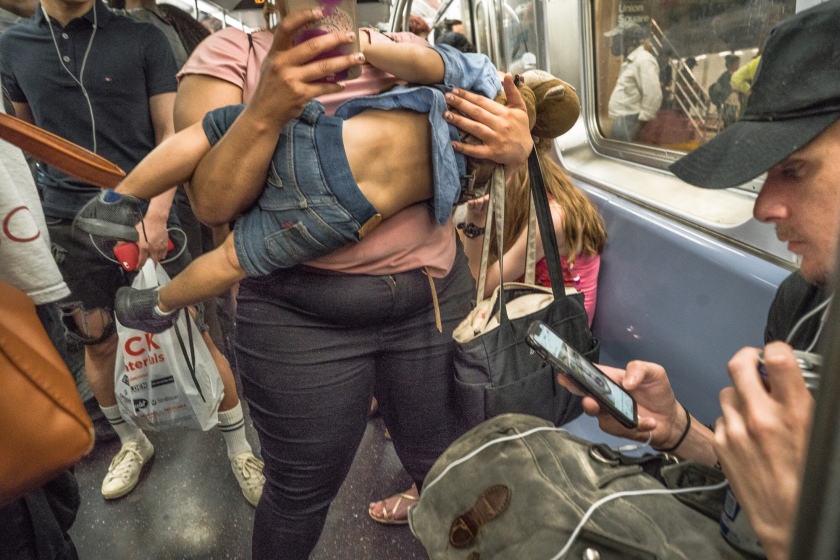 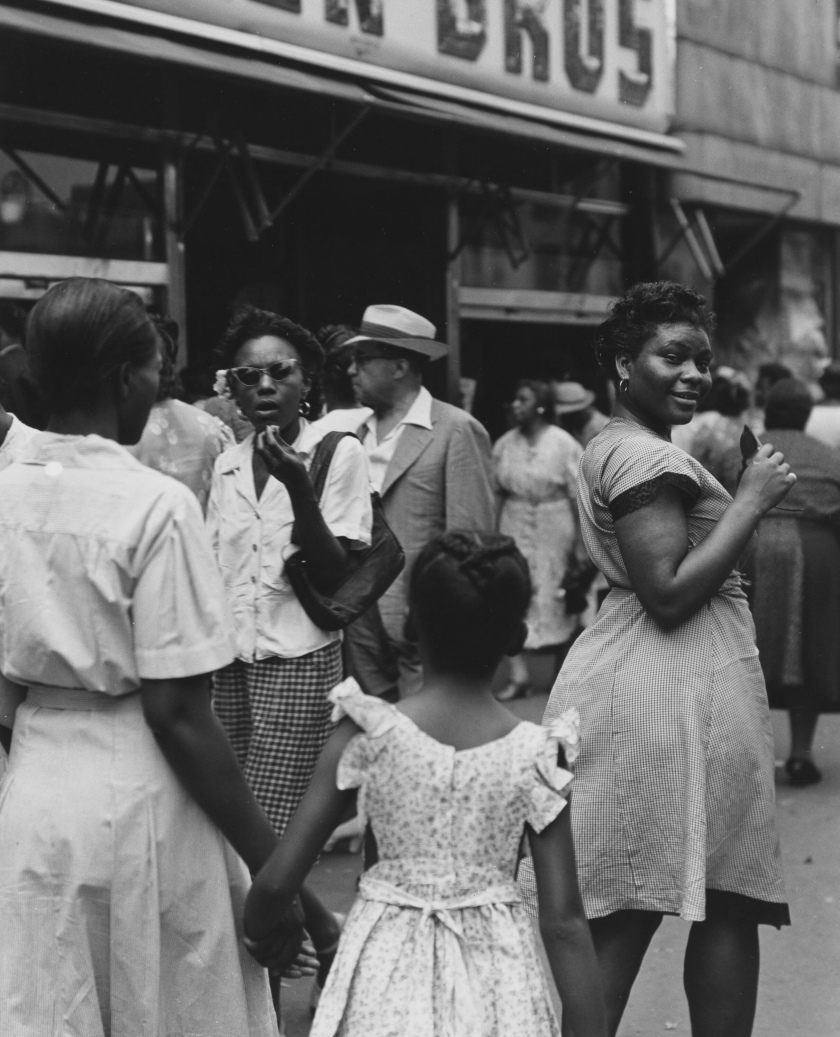 Again, the above image is from the Todd Webb Archive. Here is a recent one of mine: 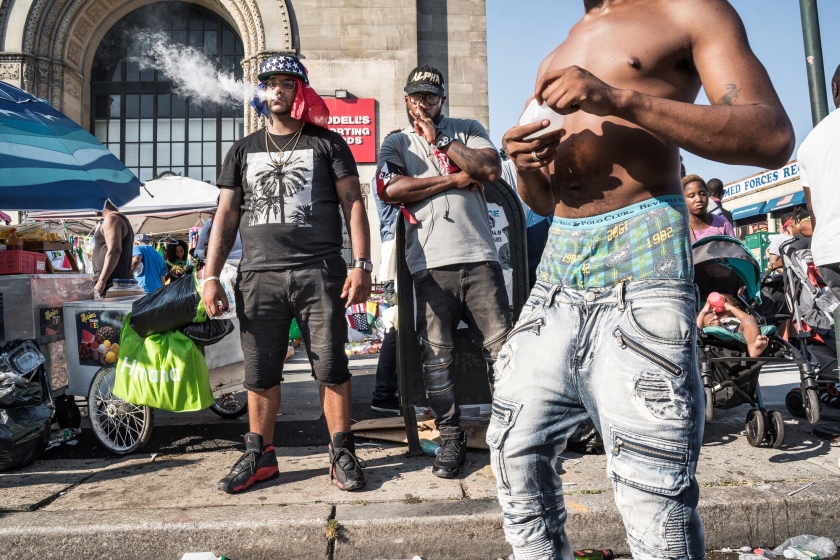 All of these images are pretty clearly time stamped….cell phones have replaced newspapers and it’s obvious that we dress differently in 2018. 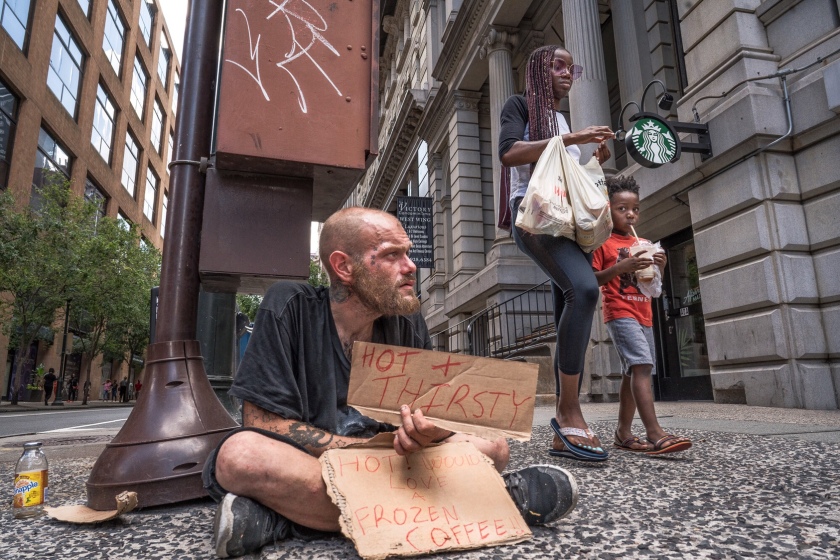 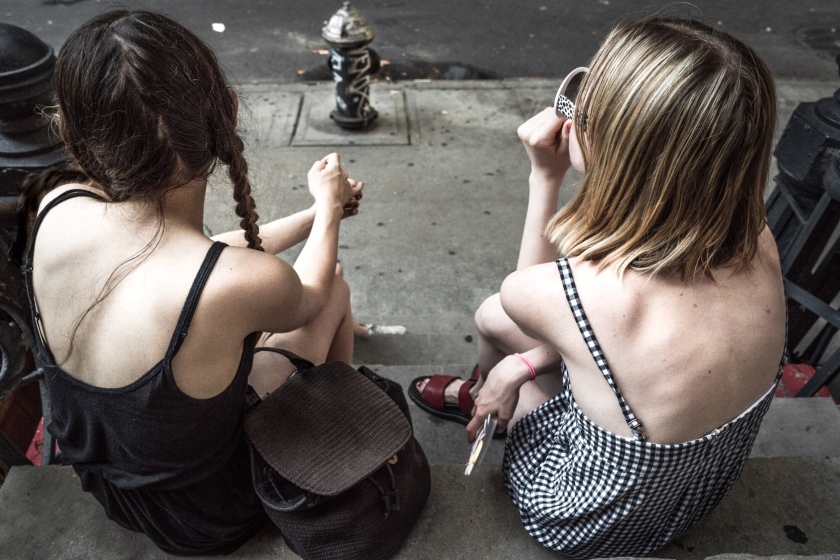 How do we shoot Street pictures without falling into the stasis that is old school street style? What exactly is it that we’re trying to accomplish? Shooting pictures to get likes and comments on social media is becoming a serious exercise in irrelevant bullshit. So…are we seriously dedicated to shooting pictures that reflect our modern social landscape? To do so we must forge ahead, simultaneously crafting an individual, modern take on photographic expressions while paying homage to the classic protocols that should still define the pursuit of social documentary photography. For me, this means attempting to showcase what’s really out there…as opposed to trying to keep it too old school, or rely on what I refer to as gimmickry to spur engagement with the images. Using modern hooks to achieve a resonance: telling the story of our times without trying to be Bresson or Winogrand or Maier or Gottfried or Levitt or Frank or Davidson…a long long list to be sure! And too many to name. 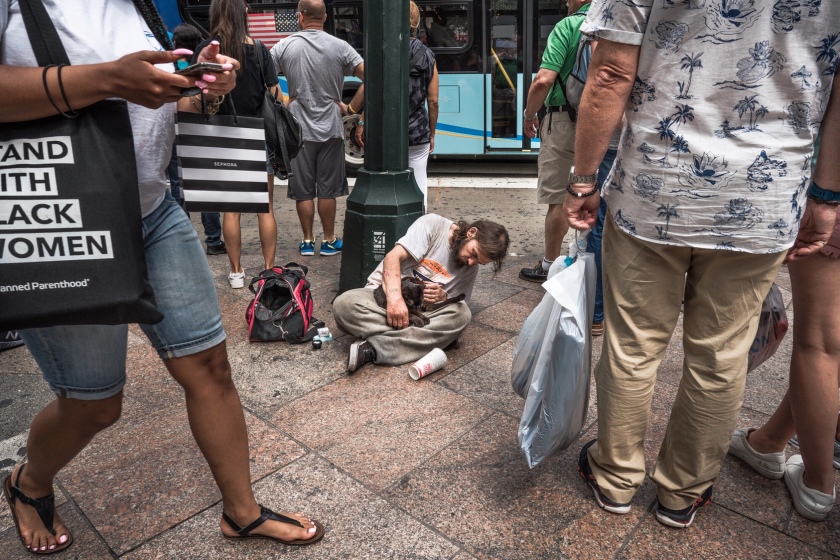 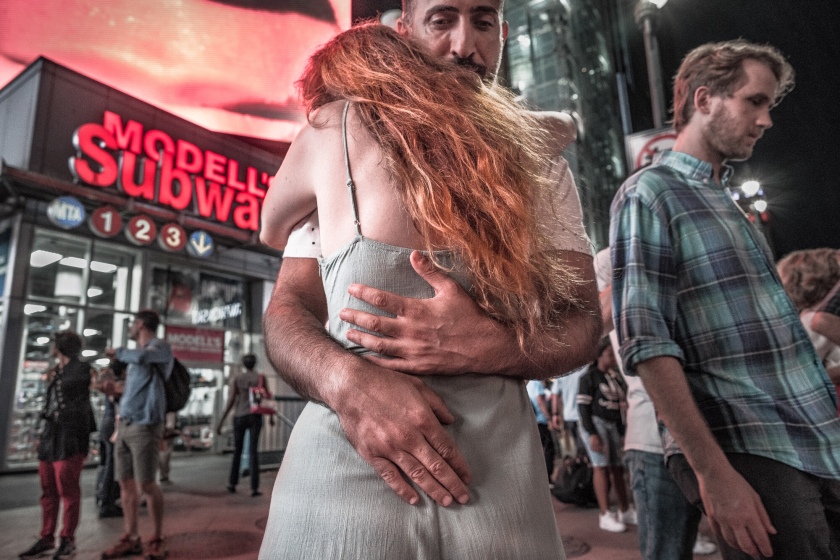 Because….people are different now. Approach and style must change along with the progression of time. Our lives have dramatically changed, and trying to take great street pictures is harder than it was decades ago. I’m sure many would disagree with me, but for me, a great street picture incorporates narrative of some kind, and to accomplish this you must have people living their lives in public view. Images that rely on shadow and superficial juxtapositions of visual elements can be very good…but lack emotion and impact other than to showcase a degree of inventive use of surroundings and photographic techniques. In some respects, this trending style of street photography is a reflection of our changing character in my opinion. Engagement with each other has begun to minimize with our growing dependence on a WiFi connection…it’s starkly apparent everywhere you turn. And this detachment, and lack of real time interaction is in evidence in many images of the street. The photographer, at a safe distance from his or her subjects, presents a detached and impersonal scene, and while these images have a time and place, are much easier to manage as they require little to no interaction and pose virtually no risk for the image maker. 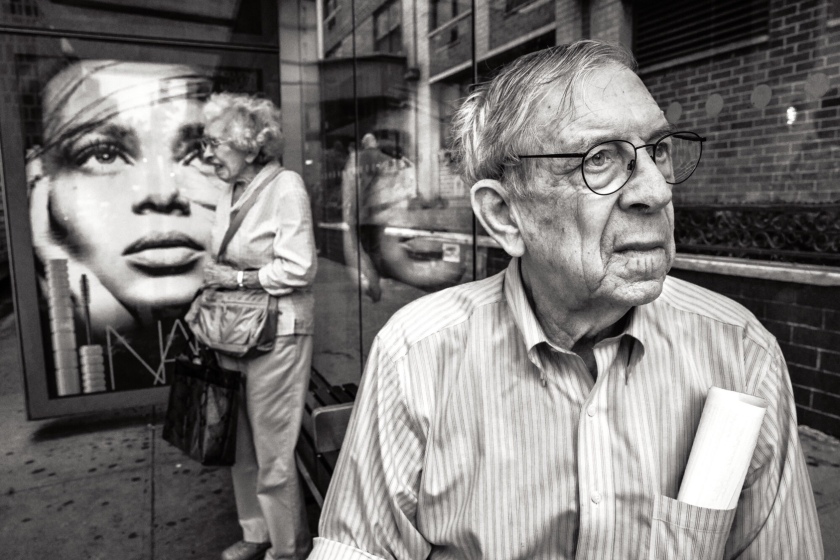 Sometimes I do think that I need to do more “big scenes”….and I do some, here and there….but I love to be close, on a wide angle lens, and it’s the crafting of pictures like this one that personally motivate me.

Another change that I find to be pretty dismal and uninteresting is the changing style of building architecture. It’s very different, larger and with a great deal less immediate interface with the street. Smoother, glass fronted surfaces are impersonal, lacking character and individuality. Signage is less idiosyncratic, seemingly almost automated in appearance, looking as if computer generated as opposed to man made and crafted. I have images that I feel are ruined by this new style and color of facades, as in this recent picture from Madison Avenue around 83rd Street: 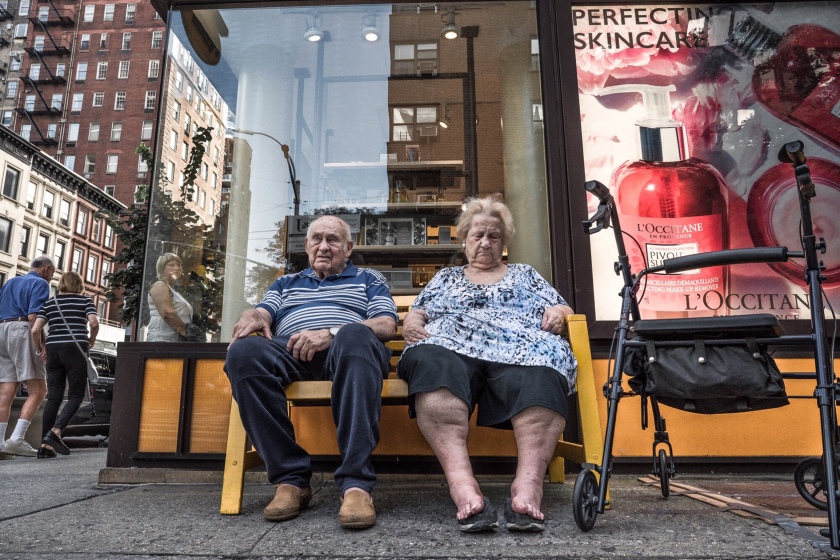 I tried mightily, significantly desaturating some of these colors but nothing I did could offset the distracting elements posed by this backdrop, despite how much I liked the older couple pictured.

People are living more and more through their smartphones, even doing their food shopping online….and, when outside, generally going from place to place with a specific purpose. Time spent outside with neighbors because apartments and homes lack air conditioning as they often did years ago, or children playing outside at all hours while their parents socialized generated many incredible moments to be photographed by these past craftsmen and women. In many places in the world there sadly seems to be much more quality time being spent indoors, locked to a computer screen or television. And when our recent evolutionary move as a first world people towards the ever present, maddening oblivion of smart phone immersion is added to the equation, shooting meaningful street photography becomes much, much more difficult. And so visits to countries and cultures that are less affected by modern inventions seems to be an important outlet for many photographers, and one that allows us to actually find people to photograph in settings that are picturesque, and encourage interactions that are engaging to record. Additionally, there is often a fear of the camera in public places in the up to the nanosecond modern world we inhabit as photographers, and the camera’s ability to record a likeness on a whim without permission of the people in the frame has become a tremendously difficult-to-navigate distrust, and with good reason. This is a direct result of the mushroom cloud that is social media, and the sometimes irresponsible and insensitive abuse of some photographers who do post images that are best discarded. Where will this picture be seen? In what context? The almost guaranteed assurance that images will be posted online is a definite barrier that must be skillfully addressed by photographers as they try to take pictures in public places. It requires patience and a willingness to interact with subjects, something that’s not embraced by all photographers. Although I interact constantly, there are times when it’s not appropriate or possible or desirable…and even I don’t want to be bothered. But personal responsibility and culpability is important to acknowledge and accept, and sometimes does elude me when I just want to take a bizarre picture of a street truth.

Of course, one can always shoot random pictures in major cities, because sometimes the absence of meaningful content is playful, and anonymity combined with the risk of an angry response is probably part of the fun: 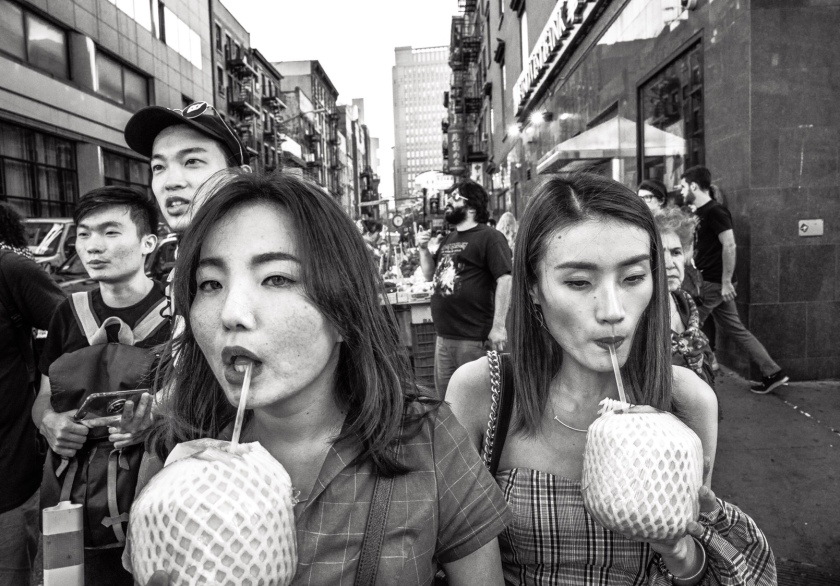 And I love the process of making pictures as in the example above. Random pictures that don’t have much depth or meaning are always a joy, but my preference is to try to find some narration in the everyday, lately a frustratingly elusive proposition. 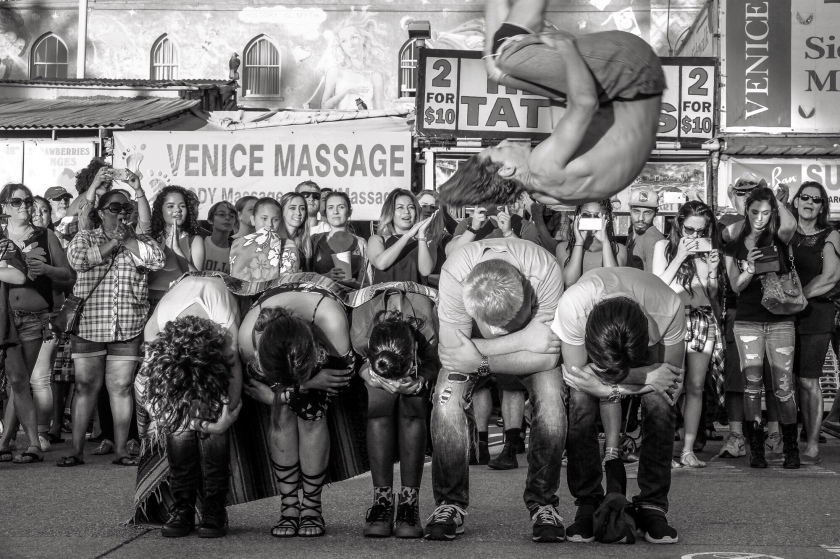 I had been a photographer for about 8 months when I took this one. I had almost forgotten about it…until I found myself in a Rizzoli bookstore on Broadway in the Flatiron neighborhood in New York City, looking through the newly published photobook of another photographer. Unfortunately, to my great dismay, I saw this photograph. It wasn’t mine….but it was. In fact, it was a nearly identical copy of the one I had been so proud of, so exact that it took me a beat to realize that it didn’t come off my SD card, somehow mysteriously and inexplicably printed in someone else’s publication. Plagiarism and copying is rampant on social media, and I remembered that the photographer who had so cleverly copied my picture had unfollowed me when I was still in Los Angeles. I know how difficult it is to execute a photo like this one, because the tumbler rotates so quickly as he traverses the length of the assembled bodies that achieving the exact positioning relative to the signage and general background is not a random occurrence. I wonder how many shots it took for him to duplicate my image–did he have to return several times, trying to capture the light (golden hour), the crowd, the general ambiance? An amazing replica, to be sure. And one that makes me feel like a parallel universe Cinderella, one that missed the party entirely. A strange feeling, and one laced with equal parts frustration, pride, disbelief and resignation. That last feeling is the worst, overlaid with a sort of dull surprise replacing the heated anger I would’ve felt a year ago. It’s happened before, and so I am learning how to try to process these occurrences without losing my temper.

When we post our hard won images to our websites and, most especially, social media platforms we are taking a massive risk. Images are routinely used without permission and therefore without compensation for the creator. The worst thing by far in my estimation, however, is plagiarism. Why? Because Plagiarism is theft. To me, it’s just as much a crime, albeit an intellectual one, as it would be if another photographer stuck his or her hand in my bag and pinched my Sony 35mm f 1.4 as I stand on a crowded subway platform.

As I write this, I’m on the 4 train. I will ride to Utica Avenue in Crown Heights so that I can walk with my camera through the crowds at the West Indian festival and parade. I know that in a crowded place on a special day that any images I manage to craft will be nearly impossible to duplicate. I am also aware that there will be someone somewhere that may try, no matter how preposterous it may seem, or how difficult or unlikely or productive. I was slow to realize that there’s no significant downside to doing so. It surprised me for a long time, this lack of respect for the work of others. Because that’s what it is, ultimately: a total lack of respect in the absence of personal responsibility and culpability in the universe that social media immersion has created. It ranges from demeaning and aggressive commentary to outright bullying. Plagiarism and theft of all kinds are not only tacitly accepted, these behaviors are strangely and surprisingly encouraged by the complex set of furtive etiquettes that govern people as they forage online for entertainment and stimulation. There is an odd defense of this habit of theft as well, the idea that once you post an artistic endeavor online, there’s an implied complicity on your part as artist–you’ve posted it or displayed it so therefore you’ve lost your rights. In speaking openly about clear instances of outright duplication I have noted an almost abusive form of chastisement for doing so, commentary completely devoid of the obvious problems associated with copyright, ethical behavior, and respect for ourselves as artists.

It’s critical that we use social media carefully, that we develop the ability to separate playful, artistic abandon from the tension and stress resulting from the inherent competition that a “likes” based system encourages. The resulting desperation from this handicapped system of encouragement from outside, anonymous sources just reinforces this total lack of self reliance, and breeds sameness, and uniformity. Devoid of the professional ethic of the working artist, we find ourselves lost in a jumble of ridiculous commentary, ruinous and frustrating instances of plagiarism that never help us to grow as photographers, and desperately childlike behaviors that reduce us all as creators.