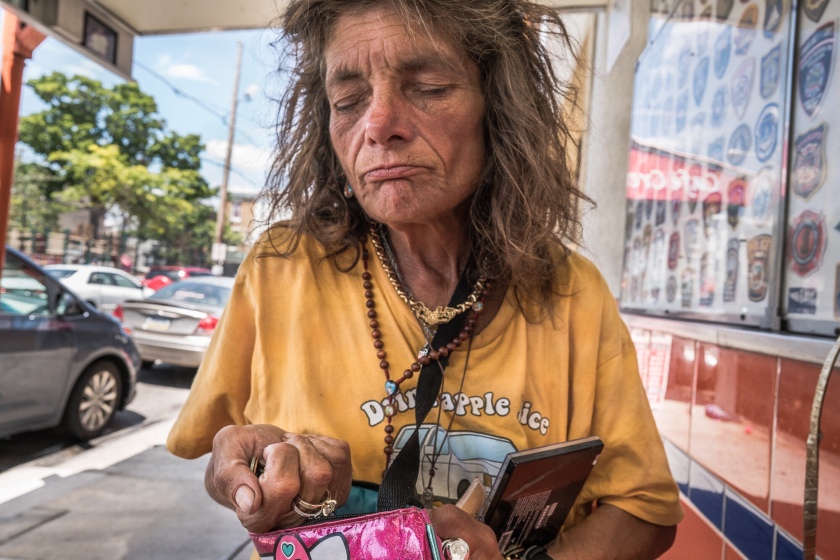 Now it’s late August. I left Philadelphia July 30….and the intensity is gone, replaced by my day to day life in New York City. I grew up in the Philadelphia suburbs and spent part of my adult life living in Center City Philadelphia. So going back this past July was a bittersweet and at times bitter and difficult journey. Janie was a big part of my experience there….she represents to me everything that’s right and wrong about the world I see on the streets as I walk incessantly with my camera. The complexities and contradictions, the necessity to understand all sides of a story to get a complete and honest picture. The rush to judge immediately without taking the time to allow all sides to weigh in.

Here’s the thing. I recently stumbled across a National Geographic short film about a pod of Orcas being studied and filmed by a photographer. The project is long term, and the short video begins by showing us a view of a lone stingray, cruising at a medium distance from the camera. The waters are a calm and a subdued blue, Heaven in the ocean waters. The calm and peace and beauty of the ray as it pulsed through the water was magical and timeless. Suddenly, an Orca appears in the frame. At first it appears as if the animal will do a close and curious pass, and nothing more. It moves along, surges past the beautiful and solitary stingray as it continues on its trajectory through the peaceful waters….and the viewer is tricked into believing that the Orca was just curious and is ready to allow the ray to continue along its life path. At the last moment, just when you think the Ray is safe, the Orca lashes with its tail, giving the ray a punishing blow to the weak, white and vulnerable underside. It’s such a shock to me, this sequence. I had an intense reaction, especially when I learned that the Ray may have been ascending to give birth, common behavior in this species I learned. The totally mismatched pairing is visually and conceptually stunning. The Orcas harassed and tossed the ray, slamming it until it was overwhelmed by disorientation, unable to even attempt to escape the area. The video stopped revealing the blows, and instead resorted to narration. After over an hour of what appeared to the researcher as some kind of display of strength and physical competence by the pod of Orcas, using the ray to project power to the nearby humans, the ray eventually lost its life, and sunk to the bottom of the ocean. It was never able to give birth, and the mammals never consumed the ray. The knowledge that it fell to the deep was irreversible, and struck me painfully and harshly, especially after I had seen it swimming so beautifully, its mastery of the waters so clearly stated. It’s impossible not to correlate this occurrence with some of what I see and photograph, this completely random set of meetings and happenstance, whether it’s shooting a picture on the street or witnessing a car accident. Or watching Janie try to make her way through a crowd of people, or attempting finding a safe place to sleep. The difference is that Janie can sometimes fight back, in a way that a creature like the ray couldn’t manage. When Janie does display her coping mechanisms and adaptations made to stay alive in her state of being, she becomes even more of an outcast, teased by insinuating laughter, annoyance and disgust and revulsion mingling in equal parts.

Looking For A Spot

Summertime in Philadelphia. I thought I’d never return….I hadn’t set foot since my son was three. That was twelve years ago, and when I returned it was like slipping on an old and comfortable robe, smelling of home, safety and familiarity mixing with the edgy reality of life in Center City, and all of it scented with freshly baked bread, and fried onions, and garlic and fresh grass and The Reading Terminal.

When I walked through my temporary neighborhood in South Philadelphia ( I was there for one month to circumvent an apartment situation in New York) I was surrounded by memory. It was profoundly absorbing, and I found that I was at first feeling very detached from the city. That initial feeling very soon disappeared, and in its place I found an intense feeling of security. 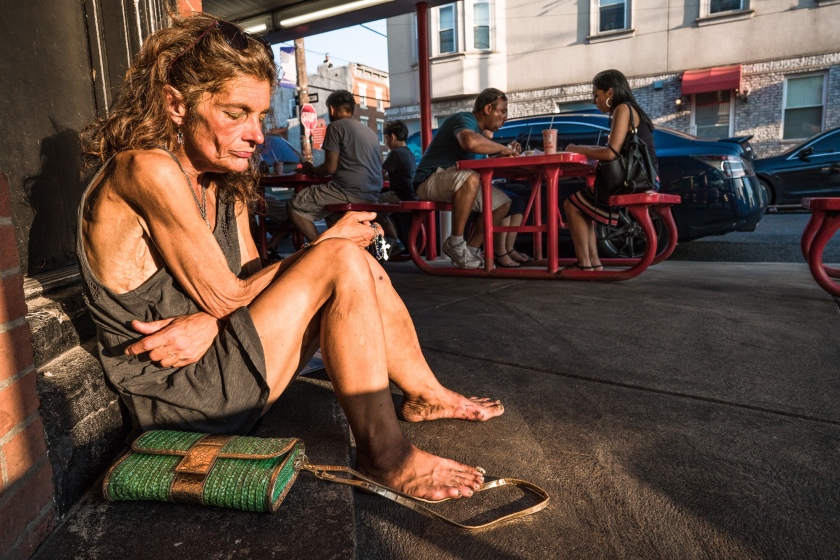 When I saw Janie one morning on 9th Street, seated on a red metal bench outside Cafe Crema near Geno’s Steaks in the Italian Market, I was immediately and completely captivated by her intensity and her singularity, a kind of enforced solitude, at once mutually agreeable and tremendously melancholy. She sat, eyes closed, holding a wooden rosary and locked in prayer.