Istanbul
Her emptiness struck me, as I attempted to make eye contact….it’s a strange expression not typically encountered in children.  It’s a total disconnection.  A disturbing sense that there’s no more left, and nothing left in there to reach.  I don’t believe this to be absolutely true, and with hard work they could be found, and repaired….but there’s no such thing in this world, not in this strangely hellish place for persons without family, in an ethnic minority, and in a place with an ancient racism that has its roots buried deep within people.  There’s nobody to repair them, and no effective social service network to render the amount of aid necessary to begin the task of removing the barricades in place that form immovable obstruction.  Police are supposed to pull them off the street, and I’ve witnessed this once, with two Syrian girls.  At the time, I thought they would be immediately returned to their mother, but I know now that that may not have been the case.  Romani kids are not on the radar here.  They are the lowest of the low in Europe, and here in Turkey these children are treated with an unnerving form of derision, one reserved for the helpless and uneducated children of parents who are part of an underclass that lives and breathes in conditions that would be considered completely unacceptable in the year 2017 in the United States. These children are at times running wild, barefoot and dirty, and possessing a rare abandonment in their play….unrestricted by social folkways, and completely unsupervised at times, playing at ATM machines, harassing street vendors, gleefully fleecing the unwary when an opportunity comes their way, and if they’ve been taught how to pickpocket successfully.  People commonly regard them with withering looks, or completely ignore them, no matter whether they’re as young as five, skinny and dirty and alone at night….speaking to them in tones far worse than anything I’ve yet seen leveled at one of the many street dogs visible here.  I can’t speak to parental responsibility, because that’s something I cannot articulate as I haven’t followed anyone home….it seems that, no matter who the ultimate responsibility lies with, the children live in barracks built with racism, neglect and dirt.  The dirt is a grime that only the most ancient of cities is capable of producing, one that is not easily washed away….and in any case never will be, as bath and shower time seems to be an impossible luxury for most. 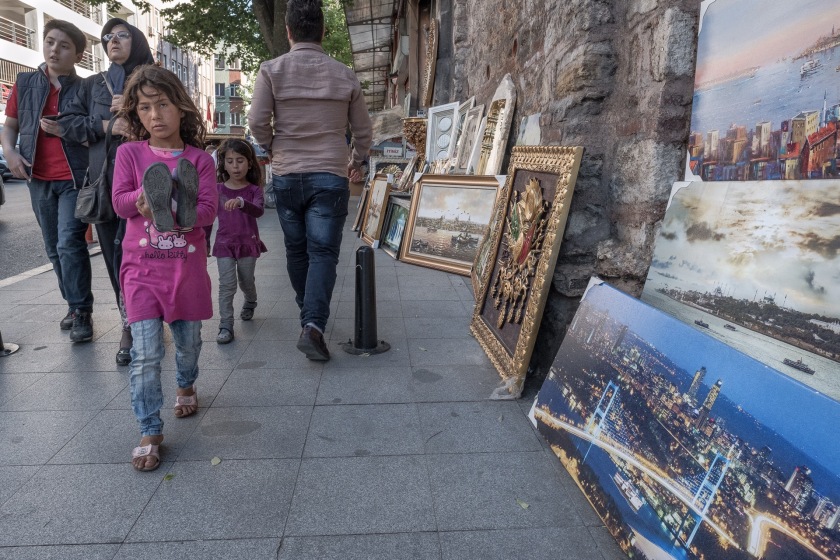 As she walked toward me I felt compelled to grab a few impressions immediately….I no longer bother to ask myself why I do this.  I do it because there are certain groups of people that I’m fascinated by, and it’s usually an interest based in my own feelings about my life, especially as a child, and my residual anger over the way things were for me.  I’m no crusader, but when I see these broken faces–and I can spot them a long way off– I react by trying to take a telling photo.  Before photography, I would carefully observe, and I always felt that something was off, that there was something missing that I should be doing.  The camera that I now carry with me at all times was, in those days, a phantom limb that ached and burned, its absence felt but not understood…..now, as a photographer, I like to observe and record simultaneously, having finally discovered this missing piece of myself.

These girls, in this case Romani (gypsy) are professional beggars.  Some have been taken from their places of origin, and are used on the street and managed by what can only be described as handlers, mostly in my observation men, who watch over them, and sometimes collect money in tourist locations ostensibly in their behalf, but that is the ruse.  The children are used as props to attract attention, and are sometimes the victims of kidnapping.  These kids don’t see much of anything around them, and they wander…. a peculiar sort of wandering that combines random meandering toward various people to ask for money, and a strange urgency.  I now realize that they must collect money, and that in many cases, the child does not directly benefit from collected funds.  It’s handed over to an adult.  The children can be seen at all hours, sometimes in groups and sometimes alone.  And when I say alone, I mean alone…..at night, mostly single boys as young as five years old, wandering the busy and unstable streets of downtown Istanbul.

So when does it stop being street photography and start being described as…..what?  It’s always street photography to me in truth,  because it’s what I see.  Street photography for me, when I’m hitting my mark, is at base the attempt to put forth true life pictures, composed and photographed on the fly with the intention of accurately reflecting the juxtaposed elements, contradictions and minuscule happenstances that we all witness each day.  I want to see pictures of what a place looks like, and clear representations of those people in the frame.  I’m not interested in graphic displays of shadowy photographic manipulation, and I don’t feel compelled to question or contemplate photos that are abstracts of reality if they exclude all personal elements in favor of easier pictures intended to showcase technical photographic prowess at the expense of intimacy and the sublime nature of interaction.  I don’t know what that other kind of street picture is called, but classic street photography it isn’t.  It’s mathematical and attractive and and at times brainy…..but easy to pull off when technically correct photography replaces courage and the ability to get close to people without fear.

Her shoes are tightly tied around her ankles by extra large shoelaces, otherwise they would fall off…..after a blessed few pictures the Turkish police swept the two girls into a waiting van to take them somewhere….I know not where.  I was only just beginning to see what I wanted out of these moments, to see the images I wanted to create, and was just grasping at and beginning to process my own intent when it was suddenly over.  Yet another lesson in acting quickly and urgently because once it’s gone, it’s gone, and it is never, ever going to come back. 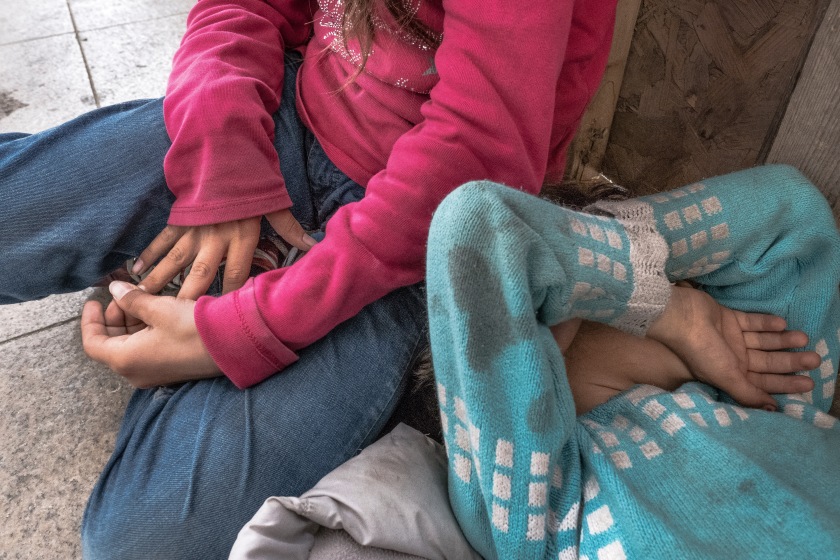 It took me a half hour of contemplation before I worked up the nerve to approach these two children.  I’ve improvised portraiture on the streets of downtown Los Angeles and worked within situations that were extremely challenging but these two girls just completely humbled me.  It’s an interesting concept, the refugee crisis.  Because that’s what it is for most of us:  a concept, a theoretical abstract that we read about but have never experienced in person.  In Europe refugees are everywhere it seems, at least in major cities.  When one considers the theoretical abstraction that these very real people have become to those of us who have not witnessed the phenomenon first hand it is nothing when compared with the deeply scarred reality.  These two were put on the street in this spot by their mother to beg all day long, under some scaffolding to shield them from the view of the Turkish police. They do not go to school, and their family home in Syria has been destroyed.  Their mother is caretaker, their father still in Syria.  The girls speak only Arabic, no Turkish, and even through the thick haze of our language barrier it was clear to me that the eldest was savvy and wise well beyond her chronological age.  I stumbled on them, the younger sister of about six sleeping, and the older girl, near 11 years of age, nodding off in clear exhaustion.